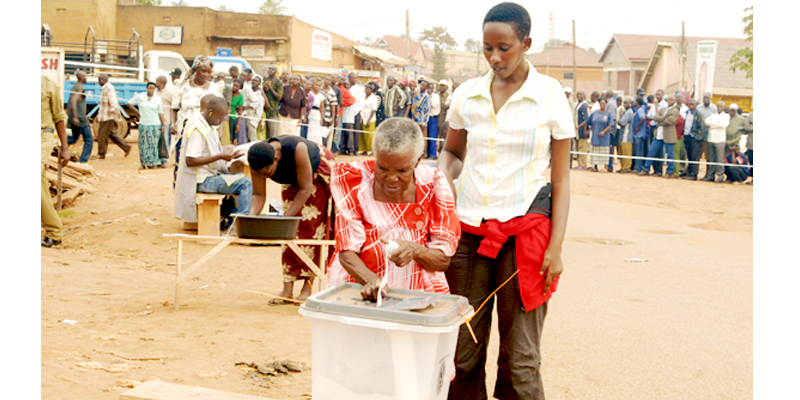 An Electoral Commission (EC) worker prepares election materials at the main warehouse in the capital Kampala February 16, 2011. Security tightened in Kampala on Wednesday as voters in carnival-like mood descended on the final rallies of Uganda’s two main presidential contenders.

(Reuters) – Uganda has ordered phone companies to intercept text messages with words or phrases including “Egypt”, “bullet,” and “people power” ahead of Friday’s elections that some fear may turn violent.

An internal email from the state-run Uganda Communications Commission (UCC) with the order was leaked to the opposition coalition Inter-Party Cooperation (IPC) on Thursday.

Patrick Mwesigwa, head of UCC, confirmed to Reuters that it was genuine.

“We had a meeting with content providers on Tuesday and we decided that a list of key words should not be transmitted,” he said.

“Messages containing such words, when encountered by the network or facility owner or operator, should be scrutinised and, if deemed to be controversial or advanced to incite the public, should be stopped or blocked,” he said.

UPDF is the acronym for the Ugandan military that some analysts say supports President Yoweri Museveni, in power for the past quarter century, and could violently put down any public protests.

Several words from Uganda’s local languages are listed too.

At his final election rally on Wednesday the main opposition candidate, Kizza Besigye, repeated warnings his supporters will take to the streets if the IPC says the election was rigged by the ruling National Resistance Movement (NRM).

“In the last two elections we were cheated and all the Supreme Court judges agreed with us but still failed do their duty (and) annul the election,” he said.

“We’re not going to the courts again. If our results don’t tally with those of the electoral commission, I will ask the people themselves to deal with the situation directly.”

Museveni, tipped to win a fourth term, has threatened to arrest Besigye if he tries to provoke street protests.

Separately, police said they had seized over 200 arrows in eastern Uganda and were searching for leaflets calling for violence that were being distributed in the capital Kampala.

“We’ve heard the leaflets carry different messages but we’re told one of them says “it’s only machetes that can help us with NRM people”,” police spokeswoman, Judith Nabakoba, told Reuters.