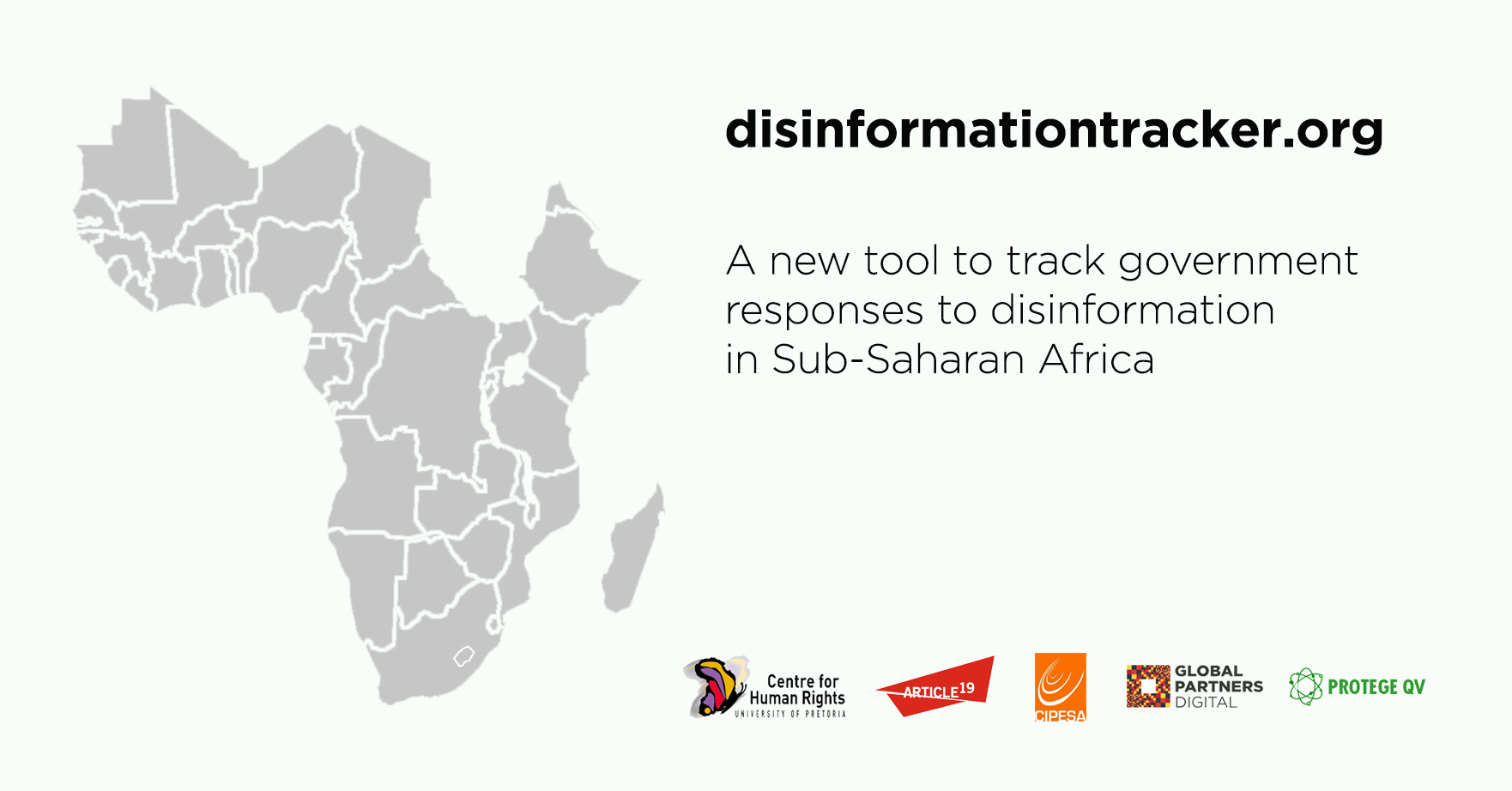 The COVID-19 pandemic has led to the dissemination of vast amounts of information, both verified and unverified. Against this backdrop, Global Partners Digital (GPD), ARTICLE 19, the Collaboration on International ICT Policy for East and Southern Africa (CIPESA), PROTEGE QV and the Centre for Human Rights of the University of Pretoria recently launched the Disinformation Tracker, an interactive map to track disinformation laws and policies across Sub-Saharan Africa. The map offers trends, analysis, and a framework to assess the status of state responses to disinformation across the region. At the time of the launch, the map covered 31 countries in Sub-Saharan Africa, with the goal of expanding to more countries in the next few months.

Since two of the organisations involved with the Disinformation Tracker – CIPESA and PROTEGE QV – are APC member organisations as well as members of the African Declaration on Internet Rights and Freedoms Coalition, APCNews reached out to them to learn more about this initiative.

APCNews: Can you briefly comment on how the Disinformation Tracker is aligned with the principles of the African Declaration on Internet Rights and Freedoms?

PROTEGE QV: The Disinformation Tracker is well aligned with some of the key principles of the African Declaration. Here, we can for instance mention Principle 4, on the “Right to Information”. This principle is based on the assumption that the information accessed through the internet is accurate and reliable. Therefore, the disinformation tracker acts as a safeguard to curb the current trend of spreading false news. The same applies to African Declaration Principle 7, “Right to Development and Access to Knowledge”. The pivotal role of the internet for people to access knowledge is more and more undermined by the loads of fake news circulating through it. Hence, the Disinformation Tracker here acts as a one-click tool to find the legislative and regulatory response put in place by each state to tackle this more and more growing issue.

Other points of convergence to be noted between the Disinformation Tracker and the African Declaration are related to Principle 8, “Privacy and Personal Data Protection”, since propagation of false news could have the effect of invading people’s privacy or to eroding their trust towards the internet, and Principle 9, “Security, Stability and Resilience of the Internet”.

CIPESA: The disinformation tracker identifies the laws and specific provisions that affect the space for freedom of speech, expression and information. And where limitation is necessary, the need to comply with regional and international human rights standards, including proportionality and legality. It also evaluates intermediary liability, redress mechanisms and oversight.

These issues fall within the need for the openness of the internet, internet access and affordability, freedom of expression, access to information, freedom of assembly and association, access to knowledge, privacy and personal data protection, security, stability and resilience of the internet, due process, and democratic multistakeholder internet governance which are some of the core principles of the African Declaration on Internet Rights and Freedoms.

APCNews: Do you have any comments to share about how disinformation affects women in particular?

PROTEGE QV: Let’s start by sharing an experience that took place in Cameroon. In the aftermath of the 7 October 2018 presidential election, the main opposition figure was arrested towards the end of January 2019 and detained without judgment for nine months. In October 2019, he took advantage of a presidential pardon to get out of jail. A little later, a letter attributed to the wife of this opposition leader circulated on the internet – allegedly, a letter in which she thanked the head of state for his pardon. The question here is, why did supporters of the ruling party attribute the disinformation letter of forgiveness to the wife rather than to the opposition leader himself?

Still in Cameroon, disinformation highly affects women because they are reluctant to verify information circulating on social media platforms (mainly WhatsApp), and they are very sensitive to messages that require sharing with as many people as possible.

In addition, Cameroon is a very communitarian society where each woman is a member of several associations (her village, her husband’s village, her neighbourhood, her friends, school alumni, etc.), and these various associations are privileged channels for the circulation of fake news and disinformation.

Overall, disinformation affects women in the sense that they are often the target of gender-based abuse online, ranging from threats, harassment, doctored images or sexually graphic images spread through the propagation of fake news. The same applies to women’s rights defenders who are subjected to false news with the ultimate aim to delegitimise them, to undermine their credibility and to devalue them.

CIPESA: Disinformation has often been used as a tactic against women in positions of power in politics, media, entertainment and even activism. It has also been used against women who simply are sharing opinions or have a presence online. Often, its goal is to silence their opinion or to sway narrative against positions they have taken or advocated for. In the case of Ugandan activist Dr. Stella Nyanzi, for a while there was a narrative fuelled by disinformation alluding to her mental health – this a narrative that has often been used against vocal women. Gendered disinformation tactics have been used during critical moments such as elections. Meanwhile, during the COVID-19 pandemic, disinformation with harmful gender stereotyping and misuse of personal information has been documented on social media platforms.

APCNews: This initiative has been launched in the context of COVID-19. Can you share any examples of measures taken by your governments with regard to disinformation related to the pandemic in the region?

PROTEGE QV: Faced with the sudden outbreak of COVID-19, the [Cameroonian] government found itself in urgent need to lead information campaigns to raise public awareness and limit risky behaviour. To make sure the right information was made available, the Ministry of Health and some other ministries (namely the Ministry of Communication and the Ministry of Women’s Empowerment and the Family) as well as the National Agency for Information and Communication Technologies took to social media platforms and mobile phones to provide citizens with accurate information through messages on the evolution of the disease and on how to halt its spread.

CIPESA: Social media in many African countries has been awash with speculation, false and misleading information on COVID-19. In Uganda, unverified reports circulated that a Rwandan national who had tested positive for COVID-19 had escaped to Uganda. In Kenya, vigilantes acting on false information beat a man to death on suspicion of having the coronavirus.

National health authorities and the World Health Organization (WHO) are also fighting disinformation on the virus through counter-narratives online and offline. For instance, Uganda’s health ministry used its social media accounts to dispel several false reports of positive cases that were circulating prior to confirmation of the first case. Many African governments have set up portals, opened toll-free lines and WhatsApp channels to disseminate reliable information on the pandemic as well as enable citizens to report suspected cases. These channels are available in multiple languages.

The front line against misinformation online has also shifted to legislative means which have been received with concern. Upon declaring COVID-19 a national disaster, South Africa passed regulations criminalising the spread of false news on the virus, punishable by up to six months imprisonment, a fine, or both.

In Kenya, the health minister said misinformation was jeopardising the government’s efforts to fight COVID-19 and warned that authorities would arrest those spreading false information. Kenya’s cybercrimes law has since been used to prosecute two individuals for spreading false information. Well-known blogger Robert Alai was charged over claims that two individuals had died in the coastal city of Mombasa; while another individual was arrested for claiming the government was lying about the first coronavirus case in Kenya.

Uganda’s communications regulator issued an advisory warning against circulation of false information on COVID-19. Pastor Augustine Yiga was charged in March 2020 for negating the impact of coronavirus in Uganda.

In Guinea, Kaka Touda, an independent journalist, was arrested in early March for posting information on social media about a possible COVID-19 case at the national referral hospital.

You can find more information on African Declaration Coalition responses to COVID-19 here.

This article was first published by the Association for Progressive Communication (APC) on July 13, 2020.