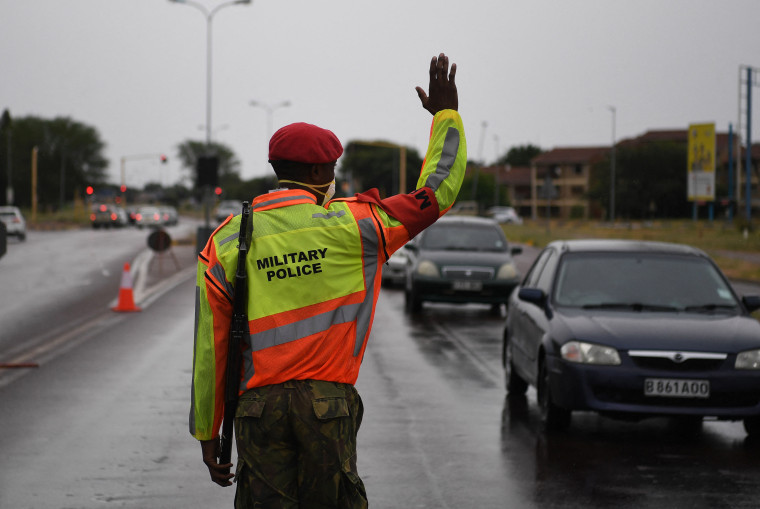 Police in Botswana detained Oratile Dikologang, co-founder and digital editor of the local, privately owned website Botswana People’s Daily News, on April 9, 2020, and charged him over Facebook posts about COVID-19 and local politics that he denies publishing, according to CPJ’s review of a copy of a charge sheet, Dikologang, and local media reports. He told CPJ by phone in 2021 that he was not an administrator of the Facebook page identified in the charge sheet, but that while he was in detention, police stripped him and deprived him of oxygen during an interrogation about sources for reporting by his own news outlet.

On April 10, 2020, police detained two other men, Letsogile Barupi and Justice Motlhabani, in the same case, they told CPJ in separate 2021 phone interviews. The next court date for their case was scheduled for May 19, 2021, according to Dikologang.

CPJ reached Dipheko Motube, assistant commissioner and spokesperson for the Botswana Police Service, by phone in mid-April, and sent questions by email and messaging app at his request; he declined to comment because the case was still before the court. Batlhalefi Leagajang, press secretary to President Mokgweetsi Masisi, responded to CPJ’s repeated calls by SMS to say he was busy, and did not respond to a follow-up message or phone calls.

Barupi, a university student, ran Botswana Trending News, the Facebook page that published the posts; he described the page to CPJ as “questioning everything.”

Motlhabani, a spokesperson for the opposition Botswana Patriotic Front party of former President Ian Khama at the time of his arrest, co-founded Botswana People’s Daily News with Dikologang, but gave up his stake in the publication in 2019, he told CPJ. He is currently employed as a non-partisan civil servant and still periodically works as an editor for the news website, he said. Like Dikologang, Motlhabani denies responsibility for Facebook posts on the page Barupi administered, but told CPJ that police abused and interrogated him about his own Facebook page, Botswana Breaking News.

CPJ was unable to review the Botswana Trending News or Botswana Breaking News pages in 2021, including the posts identified in the charge sheet, because they were no longer online. Both Barupi and Motlhabani told CPJ that their pages were disabled after police demanded their passwords during interrogation last year; they were not responsible for other pages with similar titles that were active when CPJ searched Facebook in May, they said.

Titles listed in the charge sheet and media reports about the case suggest some of the posts referred to President Mokgweetsi Masisi’s decision to implement a COVID-19-related state of emergency in early April 2020 and allegations that authorities were suppressing information about the rate of infection at the time. Another appears to discuss an alleged plot by security agents to kill an anti-corruption investigator who accused Khama of embezzling money in 2019, an accusation media reports say Khama has denied.

Dikologang, Barupi, and Motlhabani each told CPJ that they were arrested in different parts of the country, then transferred to the headquarters of the police Serious Crime Squad in the capital, Gaborone. They were detained there, and then in a prison in the town of Lobatse, for over a week before being released on bail, according to local news reports at the time. All three face two counts each of publishing “with intention to deceive” under the emergency COVID-19 regulations, plus one count of “publication of alarming statements” under the penal code, and one count of “offensive electronic communication” under the cybercrime act, according to the charge sheet, Motlhabani, and Kagisano Peace Tamocha, a lawyer representing Motlhabani and Dikologang who also spoke with CPJ.

Several people have been charged under the emergency powers, which penalize spreading information about COVID-19 that is deliberately false or based on unofficial sources with prison terms up to five years or 100,000 pula (US$9,250), according to the South African Mail and Guardian newspaper and CPJ’s review of the regulations.

Dikologang told CPJ that police physically abused him in detention while interrogating him about his sources. He said that while at the Serious Crime Squad headquarters he was stripped naked and had black plastic placed over his head to restrict his breathing, an account he also gave to local newspaper The Voice at the time.

“They were asking about sources and how our sources related to the former president,” Dikologang told CPJ. They were particularly interested in reporting about poaching that his website had shared on Facebook, he said. Botswana People’s Daily News, which operates with four staff as well as freelance reporters, began as a Facebook page around 2016, he said; the page, which describes itself as “dedicated to citizen journalism,” had over 423,000 followers in April 2021, according to CPJ’s review.

Motlhabani and Tamocha said police and intelligence agents seized cell phones and computer equipment from Motlhabani, and applied a taser to his back and buttocks during interrogation, as the Mail and Guardian reported at the time. As CPJ documented this month, police also used digital forensics equipment made by companies in Israel and the United States to search his phone and computer in relation to “offensive content” published on his page, as well as Barupi’s, according to an affidavit they submitted to court.

“They said they were aware that I was in touch with the former president and members of his cabinet and they wanted to know if he was one of my sources,” Motlhabani said.

Barupi told CPJ that police in Gaborone interrogated him about his Facebook page and asked if he had any political affiliations, but did not focus on the posts in the charge sheet; he was not mistreated, he said, but police seized his phone, requested his password, and reviewed his messages and contacts, he said. The same police affidavit described the retrieval of information from the phone relating to “offensive” content on his Facebook page.

Documents that police submitted to court, which CPJ reviewed, say that they confirmed ownership of mobile phone numbers the men used with Orange Botswana, the local subsidiary of the France-based telecom company. The company provided account registration information for all three, as well as an “activity log” from an account owned by Dikologang, according to the documents, which do not say what that log included or why it was sought. The documents reference a court order dated February 17, 2020, though one of the statements that an Orange Botswana representative provided to police is dated January 29, according to CPJ’s review.

In an email to CPJ, Lepata Mafa-Nthomola, director of legal & corporate affairs at Orange Botswana, said: “We comply with all court orders and the identity, profession or political affiliation of the subject has no influence on the legal obligation to comply with a court order.” We are “not at liberty to disclose the contents of a court order with anyone other than the mentioned entity or individual,” she said. In a separate email, Orange Botswana referred CPJ to police to clarify the apparent discrepancy involving the dates in the documents.

“The press now is going to fear that the government is using these kinds of laws,” said Dikologang, adding he was concerned that journalists may feel they were not free to report on stories critical of authorities. “Definitely it’s going to have an effect on how we’re going to operate.”

This article was first published by the Committee to Protect Journalists on May 05, 2021.