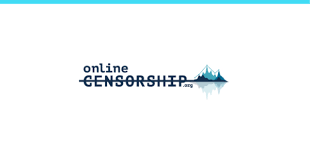 San Francisco – The Electronic Frontier Foundation (EFF) and Visualizing Impact
launched Onlinecensorship.org today, a new platform to document the who, what, and
why of content takedowns on social media sites. The project, made possible by a 2014
Knight News Challenge award, will address how social media sites moderate usergenerated
content and how free expression is affected across the globe.

Controversies over content takedowns seem to bubble up every few weeks, with users
complaining about censorship of political speech, nudity, LGBT content, and many other
subjects. The passionate debate about these takedowns reveals a larger issue: social
media sites have an enormous impact on the public sphere, but are ultimately privately
owned companies. Each corporation has their own rules and systems of governance that
control users’ content, while providing little transparency about how these decisions are
made.

“We want to know how social media companies enforce their terms of service. The data
we collect will allow us to raise public awareness about the ways these companies are
regulating speech,” said EFF Director for International Freedom of Expression and cofounder
of Onlinecensorship.org Jillian C. York. “We hope that companies will respond
to the data by improving their regulations and reporting mechanisms and processes—we
need to hold Internet companies accountable for the ways in which they exercise power
over people’s digital lives.”

York and Onlinecensorship.org co-founder Ramzi Jaber were inspired to action after a
Facebook post in support of OneWorld’s “Freedom for Palestine” project disappeared
from the band Coldplay’s page even though it had received nearly 7,000 largely
supportive comments. It later became clear that Facebook took down the post after it was
reported as “abusive” by several users.

“By collecting these reports, we’re not just looking for trends. We’re also looking for
context, and to build an understanding of how the removal of content affects users’ lives.
It’s important companies understand that, more often than not, the individuals and
communities most impacted by online censorship are also the most vulnerable,” said
Jaber. “Both a company’s terms of service and their enforcement mechanisms should
take into account power imbalances that place already-marginalized communities at
greater risk online.”

Onlinecensorship.org has other tools for social media users, including a guide to the
often-complex appeals process to fight a content takedown. It will also host a collection
of news reports on content moderation practices.