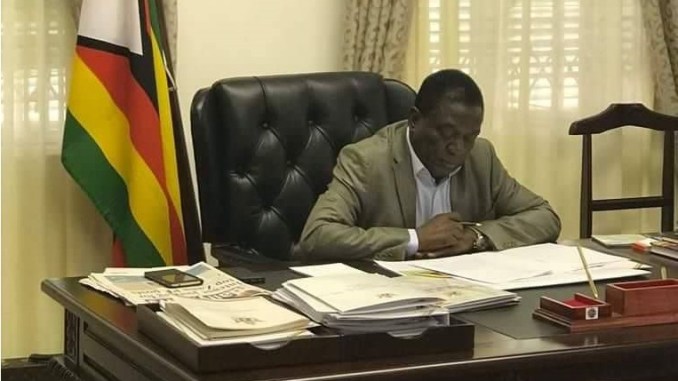 PRESIDENT Emmerson Mnangagwa has signed into law the controversial Cyber Security and Data Protection Bill, which passed through the Senate in July 2021 and was awaiting Presidential assent.

The new legislation to be called Data Protection Act (Chapter 11:12) was signed Friday, amid concerns from human rights groups that Mnangagwa’s jittery government was bent on stifling dissent on social media through the enactment of the spy law.

Among other provisions, the statute seeks to provide for data protection with due regard to the Declaration of Rights enshrined in the Constitution and to uphold public and national interests.

It will also see the creation of the Data Protection Authority which will replace the Postal Telecommunication Regulatory Authority of Zimbabwe (POTRAZ).

The new authority shall be mandated to, among other functions, regulate the manner in which personal information held by access providers such as Econet, NetOne, and Telecel may be processed.

Rights defenders have argued the government is violating social media users by snooping on what citizens send and receive on social media platforms, particularly on WhatsApp.

The Act will also criminalise offences such as the transmission of data messages inciting violence or damage to property, sending threatening data messages, hacking, cyber-bullying, and posting of sexually explicit content without consent of the data subject.

Further, it will penalise the production and dissemination of racist and xenophobic materials, child sexual abuse materials, and child p*rn*graphy.

The authority to be established under the new law will also be tasked with setting rules, giving authorisation for and governing whistle-blowing systems in the interest of fairness, lawfulness, and transparency.

While initiators of the legislation argue it will create and promote a technology-driven business environment and encourage technology development and the lawful use of tech gadgets, antagonists view the law in a bad light.

The Crisis in Zimbabwe Coalition (CiZC) says it is rattled by Mnangagwa’s government’s determination to restrict freedom of speech and expression through the deployment of a cyber team to monitor citizens on social media.

They say monitoring what people send and receive was tantamount to invasion of privacy.

Massive surveillance by the government, CIZC spokesperson Marvelous Kumalo said, will infringe on fundamental human rights and lead to an upsurge in cases of clampdowns on pro-democracy activists.

Information Minister, Monica Mutsvangwa recently announced the government had set up a cyber team to “monitor what people send and receive.”

This article was first published by the Zimbabwe Mail on December 04, 2021.