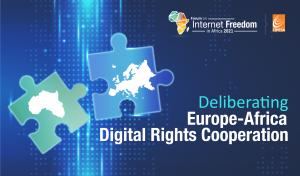 As a supporter of the upcoming Forum on Internet Freedom in Africa 2021 (FIFAfrica21), the Slovenian Presidency of the Council of the European Union (EU) will seek to enhance digital rights cooperation between Africa and Europe.

Ambassador Tadej Rupel, Ministry of Foreign Affairs of Slovenia, Presidency of the Council of European Union 2021, will be part of a keynote panel to kick off FIFAfrica21 on September 28, 2021. Others on the panel are journalist and writer Samira Sawlani, Cameroonian lawyer and activist Michelle Ndoki, and Chief Executive Officer of the Pan African Lawyers Union (PALU), Donald Deya. The panel will put a spotlight on the various dynamics that have come to shape digital rights in Africa in addition to also sharing insights on the path that should be taken towards an inclusive, safe and secure internet in Africa. Ambassador Rupel will speak about Slovenia’s digital rights in Africa engagement as part of the EU and in its national capacity.

Meanwhile, the Slovenia-based International Research Centre on Artificial Intelligence (IRCAI) under the auspices of the United Nations Educational, Scientific and Cultural Organisation (UNESCO) and its partner Knowledge 4 All Foundation will host a roundtable on the intersection of African languages and Artificial Intelligence (AI). The session, scheduled to take place on September 29, 2021 starting at 16:30 East African time, will discuss the importance of linguistic and cultural diversity in the digital era. It will also discuss the need to leverage collaborations between AI research communities, policy makers and investors, as well as bilateral cooperation between the African Union and the EU, in order to harvest the benefits offered by Language Technology for realising digital rights in Africa.

The roundtable will highlight ongoing efforts by Masakhane (supported by the Lacuna Fund), which consists of 140 contributors from 17 African countries, focused on the preservation of African languages in the information society. The session will also showcase AI projects with interdisciplinary teams of researchers that have created openly accessible text and speech datasets that will fuel Natural Language Processing (NLP) technologies in nine languages across 22 countries.

The roundtable is part of a series of global events organised by the Ministry of Foreign Affairs of the Republic of Slovenia and IRCAI in cooperation with Slovenian embassies and other permanent representatives in 12 countries around the world to garner interest in urgent and global responses to the emerging field of AI. The first event was held in London, United Kingdom on AI and decarbonization.

Speakers during the roundtable will include representatives from Bayero University, Kano-Nigeria; Uganda’s Makerere University; Maskhane; and IRCAI.

Register for the Forum here.