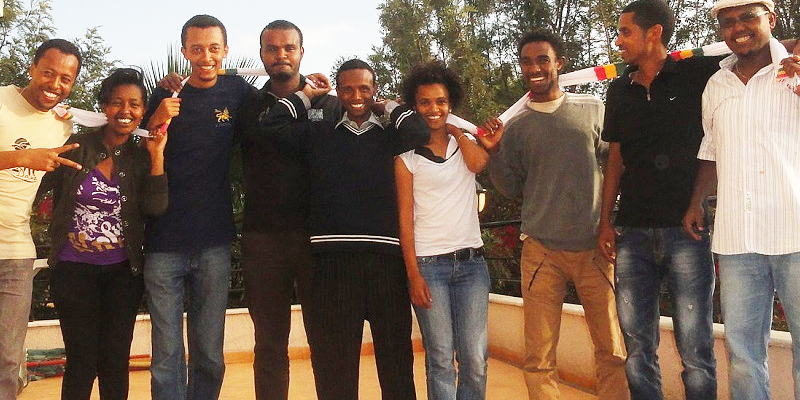 Ethiopia Files Charges Against a Group of Bloggers, Journalists Detained Over the Weekend

• Charges were brought against a group of bloggers writing for Zone9 and three journalists detained by security forces on Friday April 25th and Saturday April 26th.

According to journalist Lily Yekoye, who is at the Arada First Instance Court First Bench where the charges were filed, the main charge against the detainees was accepting money and working with foreign organizations and rights activists and using social media to destabilize the country.

Accordingly, prominent journalist Tesfalem Wadyes, who was freelancing for the weekly English Fortune and the monthly Addis Standard, journalist Asmamaw Hailegiorgis, senior editor at an influential Amharic weekly magazine Addis Guday, and Zelalem Kibret, a lecturer at Ambo University were all charged in one file and their cases were adjourned for May 7th.

Atnaf Berhane, IT professional, Edom Kassaye, who previously worked at state daily Addis Zemen Newspaper and an active member of the Ethiopian Environmental Journalists Association (EEJA) and a close associate of Zone9 bloggers, and Natnail Feleke from the Construction and Business Bank, were charged in one file and their cases were adjourned for May 8th; and Mahlet Fantahun, Data expert, Befekadu Hailu from St. Mary’s University College, and Abel Wabella, from Ethiopian Airlines were charged in one file and their case were adjourned for the same day on May 8th. Journalist Edom Kassaye

Social media hit Zone9 blog was created nearly two years ago by the group, who were writing with a motto “we blog because we care.” However, the website was immediately blocked and the group turned into Facebook to post their writings, which became a sensation for its substance and insightful criticism of the government in Ethiopia.

The group has also conducted four successful campaigns using Twitter and Facebook on four different topics, one of them “respect for the constitution.” However, Zone9 has ceased operating for the last seven months after what its members said was a growing harassment against some of its members. Two days before the mass arrest of the group members Zone9 re-started blogging using its Facebook page.

Meanwhile, friends and family members are still unable to have any contact with the detainees.