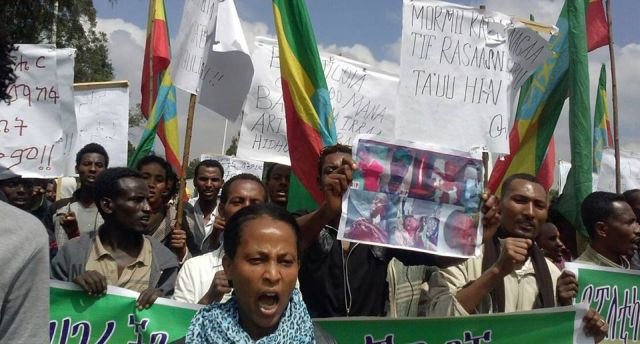 The Ethiopian government is cracking down on journalists and NGOs. Where’s the outrage from the international community?

Since November, state security forces have killed hundreds of protesters and arrested thousands in Oromia, Ethiopia’s largest region. It’s the biggest political crisis to hit the country since the 2005 election but has barely registered internationally. And with the protests now in their fifth month, there is an almost complete information blackout.

A teacher arrested in December told me, “In Oromia the world doesn’t know what happens for months, years or ever. No one ever comes to speak to us, and we don’t know where to find those who will listen to our stories.”

Part of the problem is the government’s draconian restrictions on news reporting, human rights monitoring, and access to information imposed over the past decade. But restrictions have worsened in the last month. Some social media sites have been blocked, and in early March security officials detained two international journalists overnight while they were trying to report on the protests. As one foreign diplomat told me, “It’s like a black hole, we have no idea what is happening. We get very little credible information.”

With difficulty, Human Rights Watch interviewed nearly 100 protesters. They described security forces firing randomly into crowds, children as young as nine being arrested, and Oromo students being tortured in detention. But the Ethiopian media aren’t telling these stories. It’s not their fault. Ethiopian journalists have to choose between self-censorship, prison, or exile. Ethiopia is one of the leading jailers of journalists on the continent. In 2014 at least 30 journalists fled the country and six independent publications closed down. The government intimidates and harasses printers, distributors, and sources.

International journalists also face challenges. Some do not even try to go because of the personal risks for them, their translators, and their sources. And when they do go, many Ethiopians fear speaking out against government policies—there are plenty of cases of people being arrested after being interviewed.

Diaspora-run television stations have helped fill the gap, including the U.S.-based Oromia Media Network (OMN). Many students in Oromia told me that OMN was one way they were able to learn what was happening in other parts of the region during the protests. But since OMN began broadcasting in March 2014 it has been jammed 15 times for varying periods. Radio broadcasts are also jammed–as international broadcasters like Voice of America and Deutsche Welle have experienced intermittently for years.

In December OMN began transmitting on a satellite that is virtually impenetrable to jamming. But security forces then began destroying private satellite dishes on people’s homes. Eventually the government applied pressure on the satellite company to drop OMN, which has now been off the air for over two months.

Social media has partially helped fill the information gap. Photos of injured students and videos of protests have been posted to Facebook, particularly in the early days of the protests. But in some locations the authorities have targeted people who filmed the protests on their phones. At various times in the last month, there have been reports of social media and file-sharing sites being blocked in Oromia, including Facebook, Twitter, and Dropbox. Website-blocking has been documented before – in 2013, at least 37 websites with information from Ethiopia were blocked. Most of the sites were operated by Ethiopians in the diaspora.

Independent non-governmental organizations that might be reporting what is happening face similar restrictions. The government’s Charities and Societies Proclamation of 2009 virtually gutted domestic nongovernmental organizations that work on human rights issues. The independent Human Rights Council released a report on the protests in March. It was a breath of fresh air, but the council released it at great risk. As the first report from Ethiopian civil society on an issue of great political significance, it was a damning indictment of the limits of freedom of expression in Africa’s second-largest country, with a population of 100 million.

The government may believe that by strangling the flow of information coming out of Oromia it can limit international concern and pressure. And so far the response from countries that support Ethiopia’s development has been muted. The deaths of hundreds, including many children, have largely escaped condemnation.

Yet the government’s brutally repressive tactics cannot be contained behind Ethiopia’s information firewall for long. The sooner the government recognizes this and acts to stop the mass arrests and excessive use of force, the better the outlook for the government and the affected communities.

The government—with the assistance of its allies and partners—needs to support an independent investigation of the events in Oromia, commit to accountability and justice for the victims, and start dismantling the legislative and security apparatus that has made Ethiopia one of the most hostile places for free expression on the continent. What’s happening in Oromia has long-term implications for Ethiopia’s stability and economic progress, and Ethiopians and the world need to know what is happening.