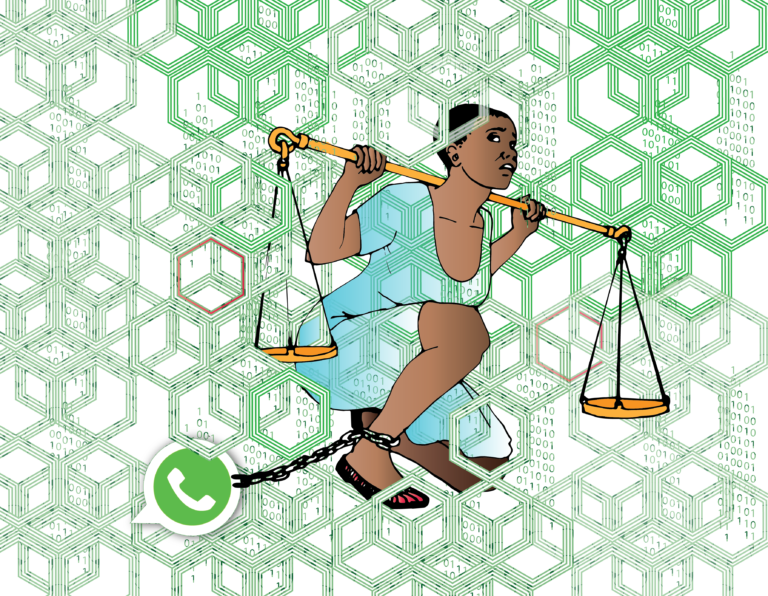 In 2014, when Uganda introduced a law against pornography, few anticipated that it would largely be used to target and prosecute women, and specifically women whose intimate photos have been shared online without their consent. The Anti-Pornography Act, whose enforcement is spearheaded by a 9-member Pornography Control Committee is mandated to “apprehend and prosecute perpetrators of pornography, collect and destroy any pornographic materials and detect the sharing of nude materials on computers, phones and television.”

Pornography, according to the Act is “any representation through publication, exhibition, cinematography, indecent show, information technology or by whatever means, of a person engaged in real or stimulated explicit sexual activities or any representation of the sexual parts of a person for primarily sexual excitement.” The Act makes it a crime to produce, traffic in, publish, broadcast, import, export, sell or abet any form of pornography, and anyone found guilty of the offence faces a 10-year jail term.

It is on these grounds that over the years in Uganda, particularly women whose private images have been leaked on the internet without their consent have been arrested by police and tasked to explain how their photos ended up on the internet.

In 2018, a university student was arrested, charged in court and sent to prison for allegedly producing and broadcasting a pornographic video contrary to section 13(1) and (2) of the Anti-Pornography law.

In another famous case, Desire Luzinda, a renowned artiste was forced to make a public apology after the Minister of Ethics and Integrity issued threats to arrest her for engaging in pornography following leakage of her intimate photos on social media by an ex-boyfriend.

The sharing of private nude images, often by jilted lovers and hackers is used as a tool to shame women, blackmail them or extort money from them. Lindsey Kukunda, who runs the online platform Not Your Body, says it is worrying that the law focuses on punishing victims whose images have been leaked rather than the perpetrators of the crime.

“When it comes to non-consensual sharing of intimate images, the law has manipulated the situation so that women can be punished for being women. They don’t try to look for the men. It is always the women that they target,” Kukunda says.

She adds that in many of the documented cases, the photos are leaked to blackmail or extort money from the victims and had nothing to do with pornography.  “The aim is often to cause distress and pain to the victims but the police make no effort to look for the blackmailer. It is easier for them to go for the woman than to carry out investigations and find the culprits who have leaked the images,” she adds.

With a focus on victims and many perpetrators getting away with their actions, this specific kind of online violence against women has been a growing trend in Uganda.

Gendered impact of the anti-pornography law

A recently released research study by the Collaboration on International ICT Policy for East and Southern Africa (CIPESA), looked at online safety for women. The findings show that despite having a lesser presence on the internet, more women are likely to face various forms of online violence compared to their male counterparts, further undermining their participation in online spaces.

Figures from the Uganda Communications Commission (UCC) show that internet penetration currently stands at 38 per cent among the general population. In another study, the Web Foundation found that only 21 per cent of women compared to 61 per cent of men had accessed the internet in the six months prior to conducting the survey. Education and income levels played an important factor in women’s internet access, where women with some secondary school education are six times more likely to be online than those with primary and no education.

“The absence of laws designed to specifically address the various forms of digital violence such as ‘revenge pornography’, trolling and threats, and the lack of sufficient in-country reporting mechanisms exacerbate these challenges and often result in many women being forced to go offline or resorting to self-censorship,” the study reveals.

Ophelia Kemigisha, a human rights lawyer at Chapter Four Uganda, says what enforcers of the anti-pornography law are doing is simply policing women’s bodies. She says that the violence often meted against women online, as it is offline, has not been taken seriously. Instead, like violence offline, it is usually depicted as a simple misunderstanding between two parties.

“Unless we start to see non-consensual sharing of images of women as violence, we shall continue to see women victims being targeted instead of the perpetrators.”

The vagueness of the law further complicates its implementation. Recourse for Ugandan women, according to Kemigisha could be in the Sexual Offences Bill 2019, which is currently before Parliament. In the proposed law, it would be criminal for a person to send or transmit materials of a sexual nature, with violations attracting a fine or prison term of seven years or both.

By making it a sexual offence, victims would also be able to anonymously report cases without fear of being identified, something that is not possible under the current laws. Legislator Anna Adeke agrees. Cyber violence, she says, has a big gender aspect to it and so the laws must be sensitive as regards to gender because we all suffer differently on cyber platforms.

“Knowing that the media which occupies most of the cyberspace is a very patriarchal arm, it’s important that laws are gender appropriate so that we make it increasingly risky for people to abuse women online,” says Adeke.

Peace Oliver Amuge, from Women of Uganda Network (WOUGNET), an organisation that supports women’s use of Information and Communication Technologies (ICTs) says based on years of research on technology-related violence against women, for victims, one of the biggest challenges is the mechanism of where to report cases as the Police is often not competent enough to deal with cases.

Jimmy Haguma, the head of cybercrimes unit at the Uganda Police acknowledges that law enforcement officers are not well trained at investigating cases of digital crimes, especially those involving non-consensual sharing of private images.

“One of our biggest challenges in addressing online violence against women is where they can report cases to. The typical police station is not equipped with that. We are trying to devise online methods where people can report cases.”

Apprehending perpetrators, according to Haguma, has also been complicated by the fact cyber-related crimes against women, including the non-consensual sharing of their images, are often carried out by people using stolen phones.

“They use stolen phones to send text messages to their victims to send money through mobile money so that they don’t publish their images. If a person doesn’t make a call, then tracking such a person then becomes difficult,” he said.

Without adequate avenues for victims to report cases, innovative platforms such as the Women At Web Portal that is currently under development hopes to fill the void and make it easy for women victims to report cases of violations online and safely. The portal is being spearheaded under the  Women at Web project, an alliance of five organisations, including Chapter Four Uganda, the Collaboration on International ICT Policy for East and Southern Africa (CIPESA), the Defenders Protection Initiative (DPI), Not Your Body and Unwanted Witness. The alliance is working to improve digital literacy and security among African women in Kenya, Tanzania, Rwanda and Uganda.

Brian Byaruhanga from the Defenders Protection Initiative, which is spearheading the development of the portal says the intention is to be able to acquire evidence based on the violations that women are experiencing online, and also make it easy for victims to report cases anonymously and safely.

“The portal will help us in policy advocacy and improve the protection of women online. As it stands now, there is no proper documentation of these cases and yet for advocacy, you need the data,” says Byaruhanga.

The portal will also be used to generate information on the types of violations, where and how they are happening and which categories of women are most targeted. This data, according to Byaruhanga will subsequently be shared with law enforcement agencies such as the Police,  to ease their investigations and therefore help victims hold perpetrators to account.

Kukunda from Not Your Body says women need to take lead in challenging social conventions for their own sake. “ Women have to rise above the illusion that being sexual is a sign of immorality. It is one of the reasons they feel ashamed to report even to their friends,” adding that public conversations about these issues is what will help improve awareness and acceptance of women as sexual beings not to be demonised for it.

Support is also paramount. While there are organisations that offer free legal advice to those who cannot afford lawyers, Kukunda says women need to take the initiative to study laws such as the Data Protection Act so they can take action into their own hands.

“Women should never go alone to report a case to a police station or be naive about the system. The system is not ready to help women, nor is it interested,” Kukunda adds.

In Malawi and Uganda, non-consensual sharing of private images has yet to be widely recognized and/or acknowledged as a gendered issue. Consequently, it remains below the radar of most activists and prominent gender advocates. Globally, however, there is growing recognition that digital technology such as email, the social media platforms and mobile phone technologies are being used as a tool to harass, intimidate, humiliate, coerce and blackmail.

This article was first published by the African Feminism on June 18, 2020.