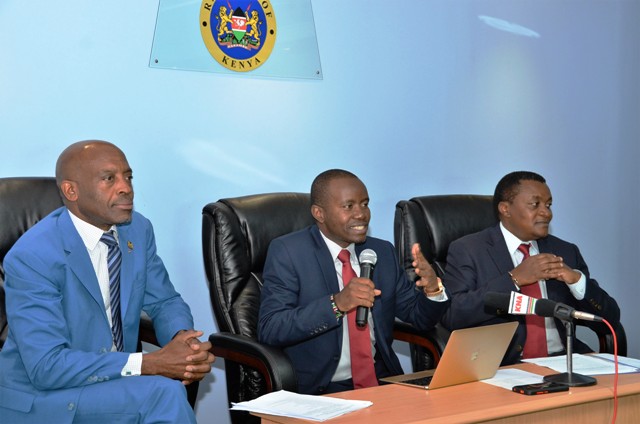 ICT Cabinet Secretary Joe Mucheru (centre) flanked by Principal Secretary for Broadcasting and Telecommunications Sammy Itemere (left) and Eng Victor Kyalo of ICT and Innovation, addresses consultation meeting with Media Editors recently, where he took them through Computer and Cybercrime 2016 Bill at his Telposta Towers office.

The Ministry of Information, Communications and Technology (ICT) has invited Kenyans to make contributions to the Computer and Cyber Crimes Bill 2016 attached below. It can also be accessed on www.mygov.go.ke.

The Constitution of Kenya 2010 states that any Bill should have the input of Kenyans (public participation), before it is taken to Parliament for debate.

The Computer and CyberCrimes Bill 2016 was mooted out of great public interest. There was need to tame abuse of web based systems and reduce or eliminate cyber crime arising from increased use of new technology.  “The Bill will have the input of Kenyans/public and various stakeholders before it is taken to the National Assembly, Senate then AG’s office,” noted ICT Cabinet Secretary Joe Mucheru.

The Bill borrows heavily from international standards and global scholars. It has the input of experts from Europe, Inter-Agency Committee for Formulation on Cyber-crime, the Budapest Convention on Cybercrime and the Council of Europe experts.

According to the CS, they all agree that the Bill meets international best practices and standards. Kenyans are however free to make contributions to the Bill.

The Bill lays down wide ranging offences relating to aspects of unauthorised access or access with intent to commit further offences involving protected computer systems, child pornography, cyber-staking and computer fraud which will protect Kenyans from cyber bullying and other social ills.

Other key aspects of the Computer and Cyber Crimes Bill 2016 include protecting online cash transactions such as M-Pesa and Airtel Money, Orange Money, Mobikash among others. It will protect mobile payment channels used by most Kenyans – which process 7.5 million transactions valued at Ksh2.9 billion daily,” said the Cabinet Secretary.

“It will also protect the Kenya Electronic Payment and Settlement System (KEPSS) that transacts more than Ksh100 billion from local and international vulnerabilities.”

It will also see computer aided forensic equipment used as evidence in courts of law to reduce online fraud.

This article was first published by My Government Kenya on 12th July, 2016.