Across East Africa, Big Brother Is Watching Your Every Move 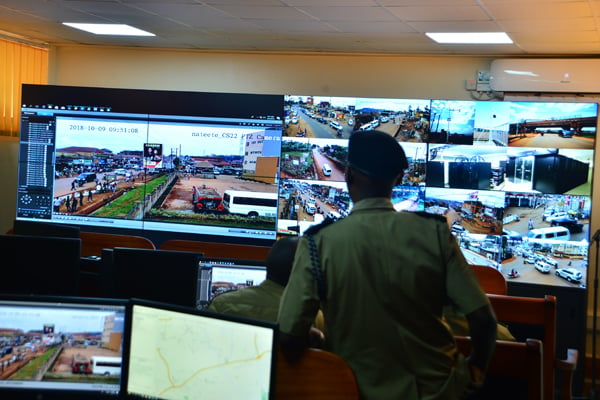 Across East Africa, Big Brother Is Watching Your Every Move

By The East African |

What you need to know:

Motorists driving across any of the major roads in Uganda, or across the capital Kampala, will not fail to notice the white gantries overhead from which CCTV cameras hang, quietly observing and recording proceedings.
The first cameras went up around 2014 when Chinese telecommunications behemoth Huawei donated 20 units worth $750,000 to the Ugandan government.
When police spokesperson Andrew Felix Kaweesi was shot dead outside his house in a Kampala suburb in 2017, the government accelerated its surveillance plans. In 2018, authorities in Kampala signed a ‘safe city’ project with Huawei worth $126m. Today about 5,000 CCTV cameras keep an eye on movements across Ugandan roads, part of a ‘smart cities’ project pushed by Huawei across many countries.

Footage from the cameras flow through a network of dedicated fibre-optic cables to 11 monitoring centres, and into a $30 million data hub at the police headquarters in Kampala. Equipped with facial-recognition technology, the CCTV project is meant to improve safety by giving the police the tools to identify and solve crime.

“[The Uganda Police Force] has an existing contract with Huawei to install CCTV cameras countrywide as a measure to strengthen law and order,” police spokesman Fred Enanga said in a statement when the project was launched. “The cameras are already transforming modern-day policing in Uganda, with facial recognition and artificial intelligence as part of policing and security.”
Footage from the CCTV camera project has been used to identify suspected criminals and solve some crimes. But apart from reports of police officers selling incriminating footage to criminals, concerns are growing about who else has access to this information, and how they are using it.

Uganda is just one of the countries in the region ramping up surveillance of public spaces. Kenya has, since 2015, had a Huawei-supplied surveillance network of 1,800 cameras and 195 monitoring centres across Nairobi and major roads. In 2019, then-President Uhuru Kenyatta signed a plan in which Huawei would expand the project to include a $173m data centre and surveillance hub in Konza City. The company has also supplied and installed similar surveillance infrastructure to Zambia, Egypt, Pakistan, Rwanda, and Algeria, among others.
African countries also known to have similar surveillance projects include Nigeria, Equatorial Guinea, Morocco, and Zimbabwe.
There are growing concerns, however, that these projects, which combine video-surveillance, internet monitoring and mobile phone meta-data collection, are giving the government the ability, not just to go after criminals, but to also illegally spy and monitor political opponents, activists, and journalists.

The article was first published by the Monitor on December 03, 2022.